Hello everyone!  Since a lot of folks requested it, I thought I would do another behind the scenes series of blog posts from the Olympics!  If you find it useful or mildy entertaining, feel free to pass it on to your friends and family.

I know many of you remember my luggage fiasco in Sochi 4 years ago, well this time I had a direct flight from Dallas to Seoul and it went VERY smoothly with all luggage intact!  In fact, I was able to get on an exit row and even traded a flight attendant a USA Today Olympic pin in return for an Ice Cream Sundae normally given to just first class.  As you can see below, she is proudly wearing that pin!  I was also grateful that we didn’t fly into North Korean airspace. 🙂

Once I landed, I took the new bullet train from Seoul to Pyeongchang before catching a bus to the media village.  These are a couple quick iphone photos, but I’ll post more media bus photos wih my real camera as each bus has its own theme and decor!  Some even look like discos!(Oh, and so far, every driver has been on time or early, quite unlike Rio.)

As far as accommodations go, this one is pretty awesome! My three bedroom apartment is fully wired as a “smart” room where lights are preprogrammed and the floors are all heated!  It is pretty cool to wake up and put your feet on the ground and then become instantly warm!  Also, we had a fuse go out on the first night and called maintenance and they were in our rooms in about 5 minutes and fixed our issue!  (Talk about great service!!)

Here is my building as well as a few of the smart controls that we are still working on figuring out lol!(I mean even the hot water is controlled remotely!)  There is still tape on the walls and on some of the kitchen tops as they will sell these units once we leave. 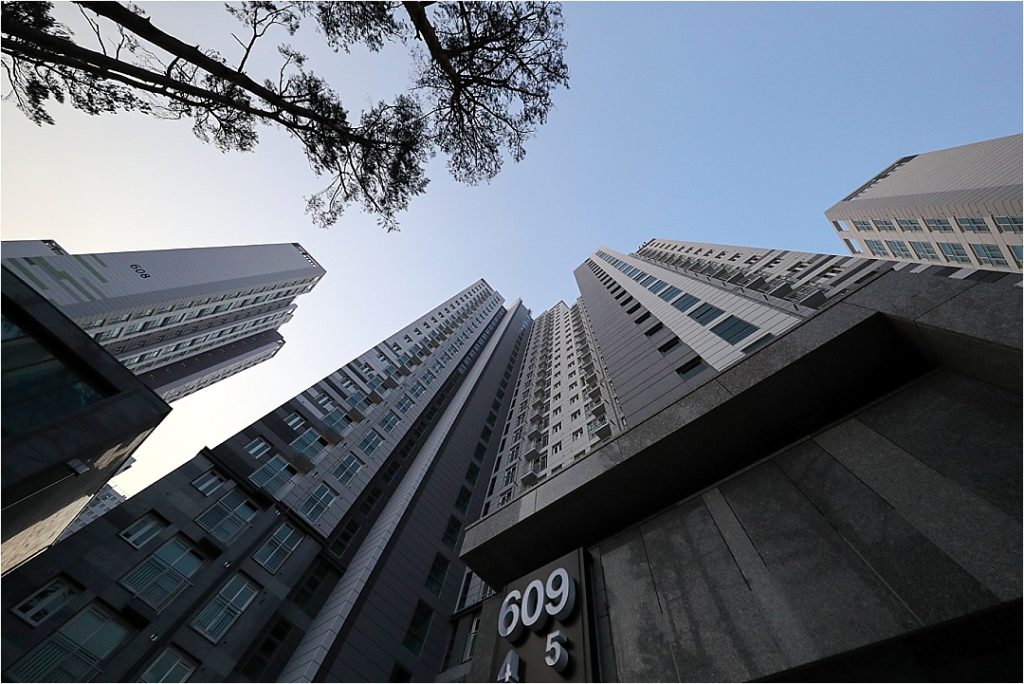 With regards to food, this place is awesome!  There are coffee houses on every corner and the Korean cuisine in the media center is really good.  I have to admit that some things are a little confusing and different (such as the spaghetti on the Sprite label and seaweed for breakfast, but overall it has been great!  For those wondering, yes the norovirus has been addressed and there are signs up all over to alert folks.  Also, hand sanitizers are everywhere! 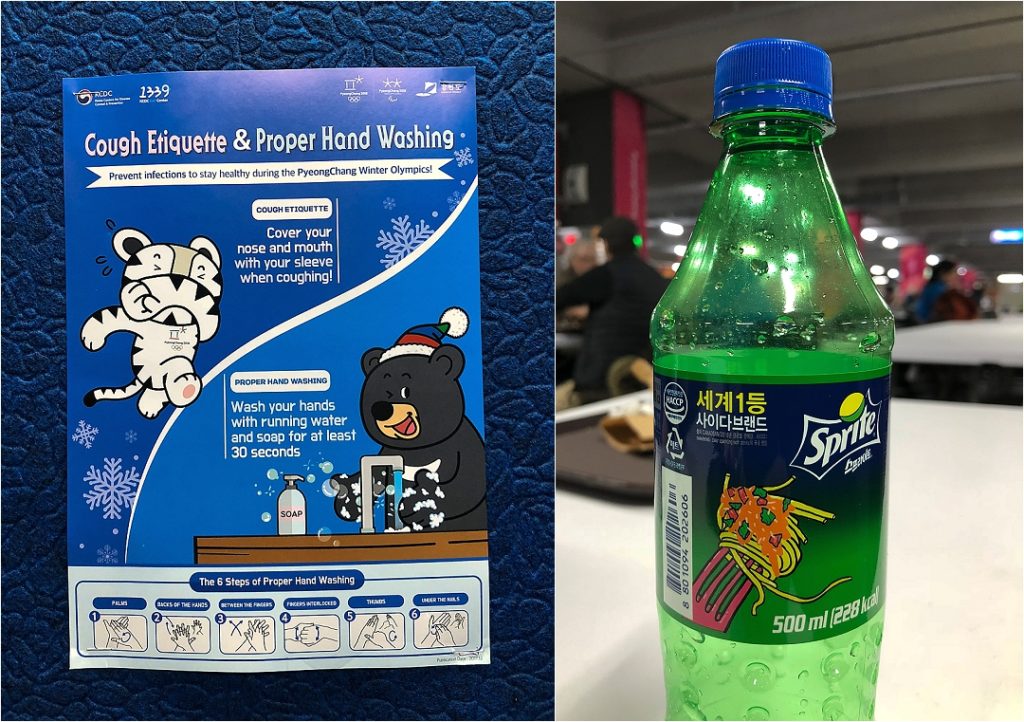 I have also found a new obsession while over here – ROBOTS!!  It’s like living in a sci-fi film at times as robots are everywhere!  These guys do everything from vacuum the floors to project the daily schedules on the carpet.  They even talk to you!  If that isn’t enough, they have robot fish aquariums!!  These robotic fish look and act so real, it’s insane!  I SOOO need this as it’s the perfect way to have an aquarium in my book! (Check out the iphone video I took to see what I mean…) 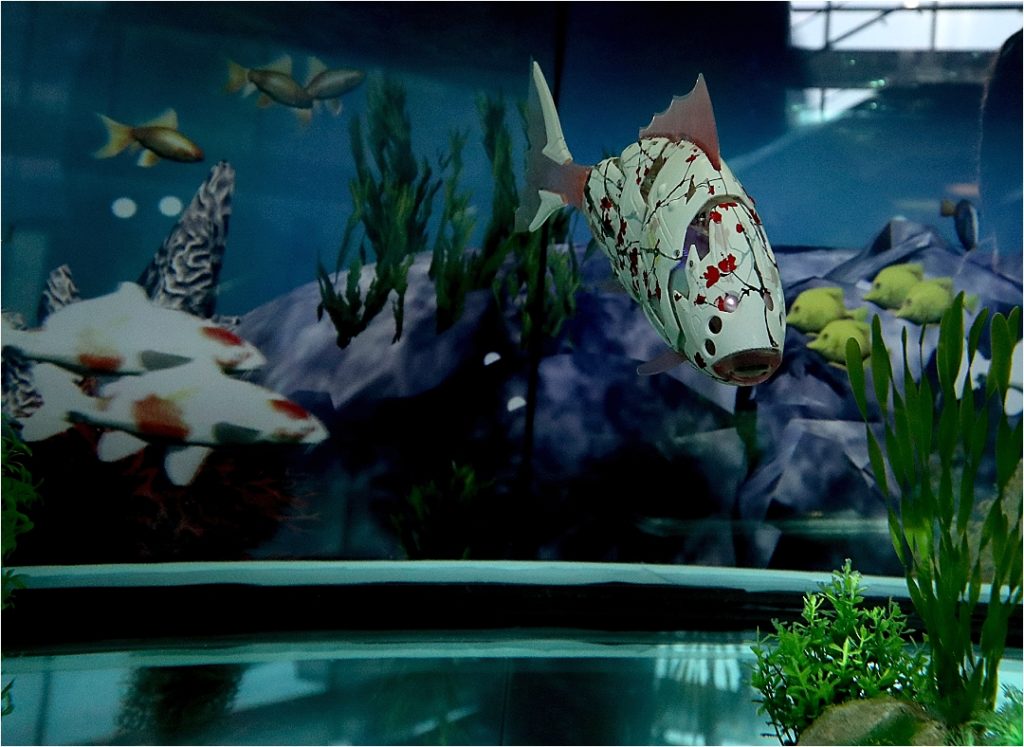 Today, we also had a big USA Today team meeting at the Main Press Center where we went over logistics, got our South Korean phones, configured all the cameras, etc… It’s probably the only time that everyone will see each other as starting tomorrow, it gets pretty crazy!  So, of course, we had to take a team photo! 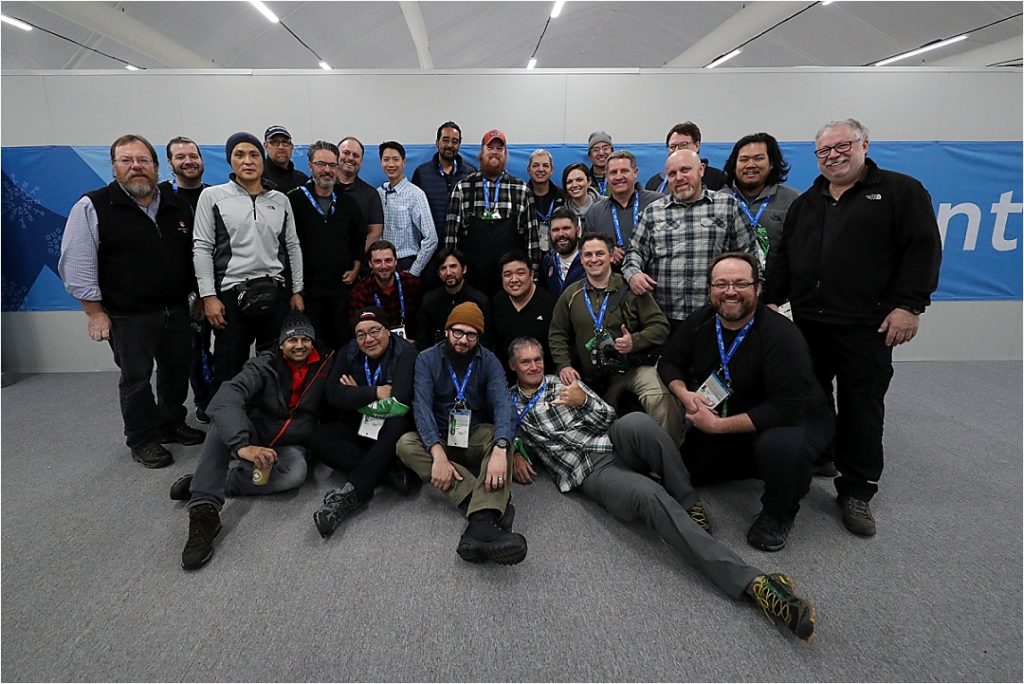 Before the meeting, I was able to have a little “Rio” and “Sochi”reunion with my buds Kyle and Guy before we all went our separate ways.  We grabbed some coffee and I once again went for an iced coffee in freezing temperatures.(I did the same thing in Minnesota last week for some strange reason as I find the dryness in the air really makes me thirsty.)  I also found out that Guy has never had a chai latte before, so hopefully he will soon and will appreciate the greatness of Chai! 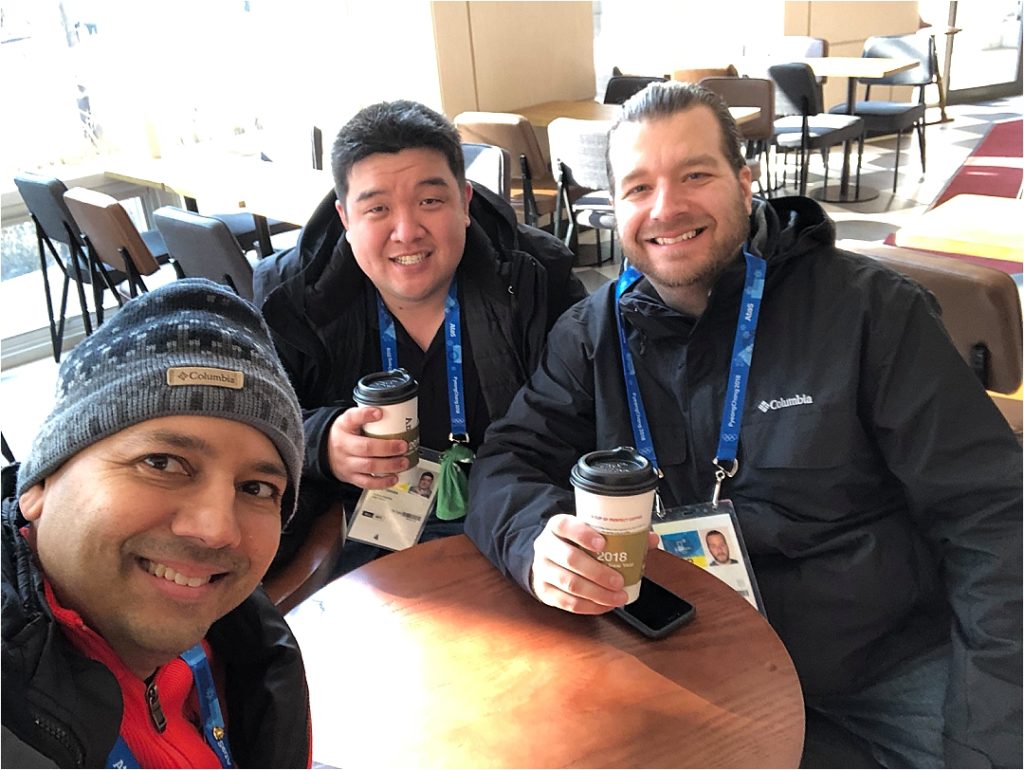 Next, I went out and scouted venues that I know I will be working in to see what the photography locations looked like.  Along the way, I grabbed a couple of Olympic ring photos as well as one my buddy Matt Kryger took of me. 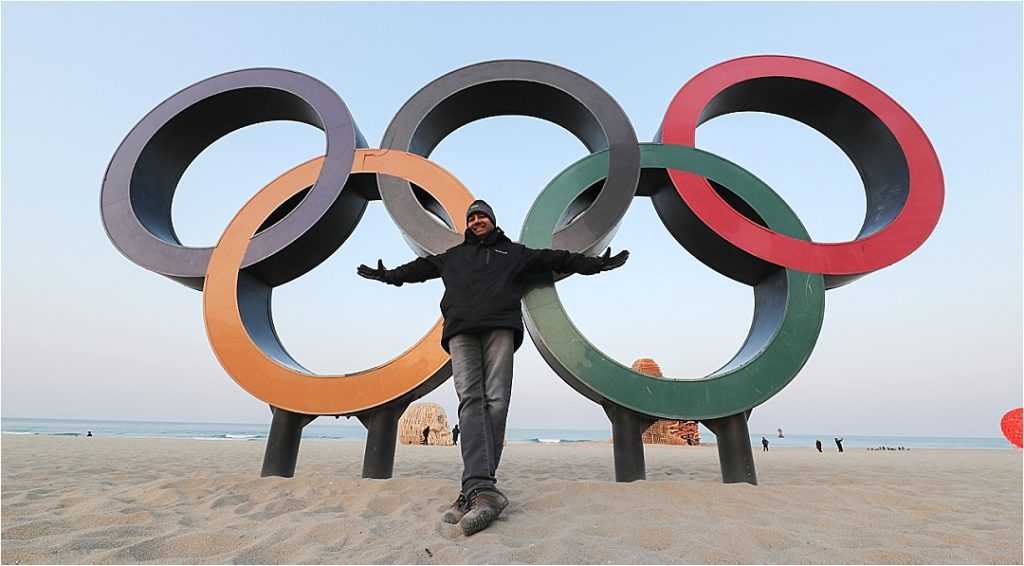 To end the long day of shooting and scouting, Matt and I decided to go to an authentic Korean seafood restaurant for dinner.  We had a blast as we were eating stuff that we had no idea what it was.  Matt isn’t much of a seafood guy, so when his grilled fish came out looking like this, it made for a great photo opportunity! (I had the most delicious snow crab by the way!) 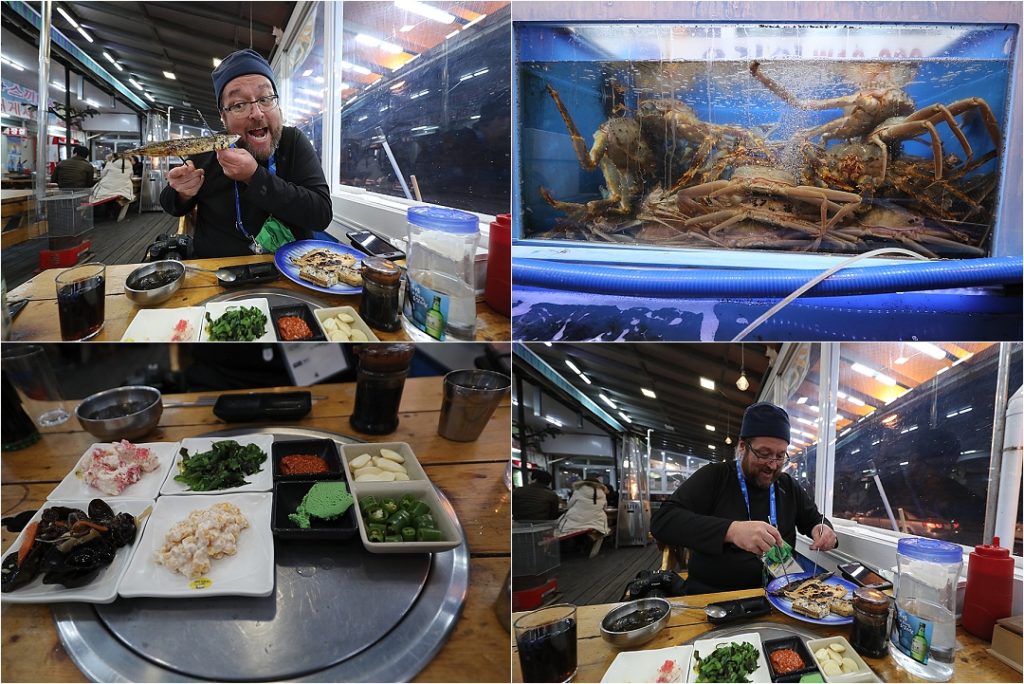 Well that was a full first day and I am super excited to cover the Opening Ceremony tomorrow(Well except for the freezing cold), so if I don’t lose all my fingers to frostbite, I should have some cool stories and images to show on my next update!

Awesome!! Thank you!!
I LOVE the Winter Olympics and over the last couple of Olympics, I look forward to your posts equally as much!!

Wow Kevin! So enjoy reading about your experience in South Korea. That aquarium!

Awesome. Glad you made it safe. Korea technology is pretty awesome isn’t it? Some of the quickest internet I’ve experienced is there too. Enjoy! Thanks for the update my friend.

Great first Olympic entry. I look forward to following your adventures throughout the Olympics (hmmm, could there be a book here?).

Can’t wait for all the rest of your blog posts! They’re so entertaining! Have so much fun!! USA!!!

I just love your behind the scenes footage!! A family friend of ours is a ski jumper…Kevin Bickner!! If you’re at that event you’ll have some new fans!! Looking forward to your stories!!

this is awesome, thanks for the inside scoop. What an exciting adventure!

Thanks for sharing Kevin! Stay warm, if that’s even possible, and enjoy!

Can’t wait to see everything Korean and the Olympics through the eyes of your camera and your awesome artistic talent!!

Great post and looking forward to seeing your images and hearing about your awesome experiences. I can’t imagine the high you are on…

Very quickly this site wil be famous amid all blog visitors, due to it’s
pleasant articles

Compared to your other Olympic experiences this looks so amazing and that you can actually enjoy Korea!

Thanks Kevin! Very good information on how it is.